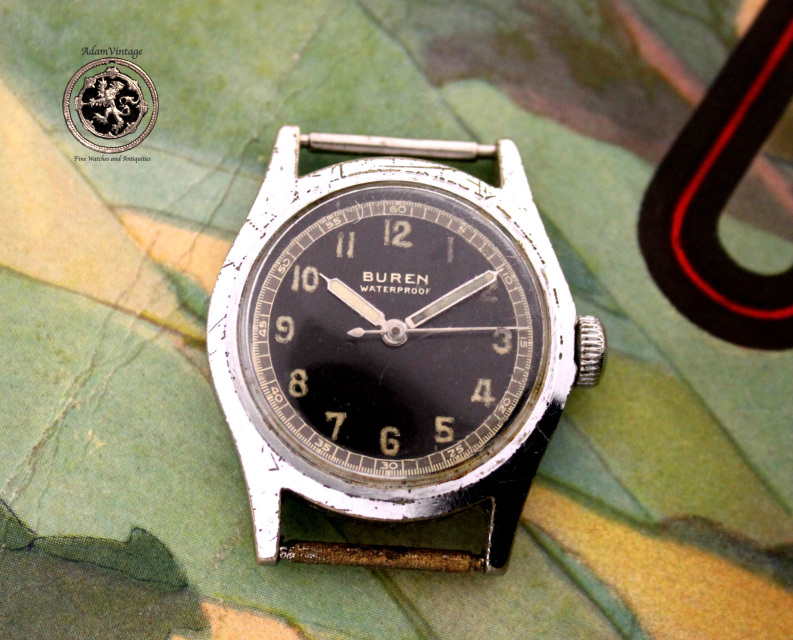 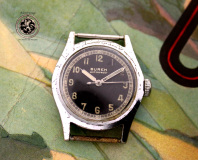 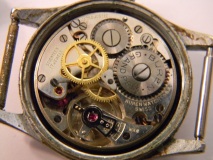 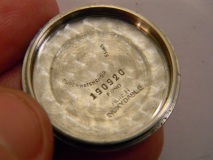 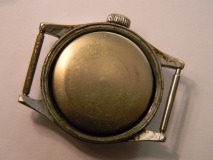 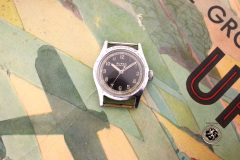 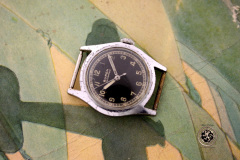 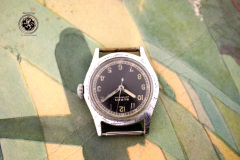 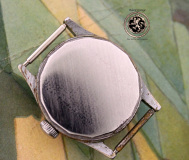 SKU:
$400.00
375 400 $375.00 - $385.00
$385.00
Unavailable
per item
This is a very nice military style watch by Buren with sweep center seconds for the 60 sec chapter ring.  The chapter ring, hands, numerals and print on the watch appears to be all the same paint material which has patina to a very nice cream color.  I believe the watch is full stainless steel.  I can tell you that the movement is very clean and was just serviced.  The watch is about 32mm in diameter and comes with a strap if you wish.  This watch is completely original, even the crown and crystal.   It also has its dust cover which is often missing.
Add to Cart
HistoryThe Buren Watch Company was created in 1898, following the acquisition of Fritz Suter & Cie, at the Swiss town Büren an der Aare (canton Bern), by the London company of H. Williamson Ltd. There were produced pocket watches of all types and table clocks. Due to the existing rail link H. Williamson Ltd. invested and expanded further in Büren and developed the site into an international branch. From 1916 Henry Williamson used the signature "Büren Watch Co."
Then the H. Williamson Ltd. had to close due to a stock market crash. However, a group of Swiss and an Englishman provided the capital necessary to be able to continue the watch production under Swiss management and with the new name Uhrenfabrik Buren AG.
In 1966 the Buren Watch Company was sold to the Hamilton Watch Company. Buren quickly became the manufacturer of the majority of Hamilton watches, eliminating US production. Buren continued working on new movements, notably Calibre 82, a high-beat movement. But the Buren name was retired before it was finished. After Buren/Hamilton was taken over by the SSIH in 1971, the company rapidly failed. In 1972 came the end of the Buren Watch Company, with all assets sold.
Today the brand name is owned by the Schweizer Uhren Editionen (Swiss Watches Editions) in Hamburg, which again manufactures watches under this label. Partly with old movements, but to a large extent also with ETA movements.
Literaturecredit: watch wiki