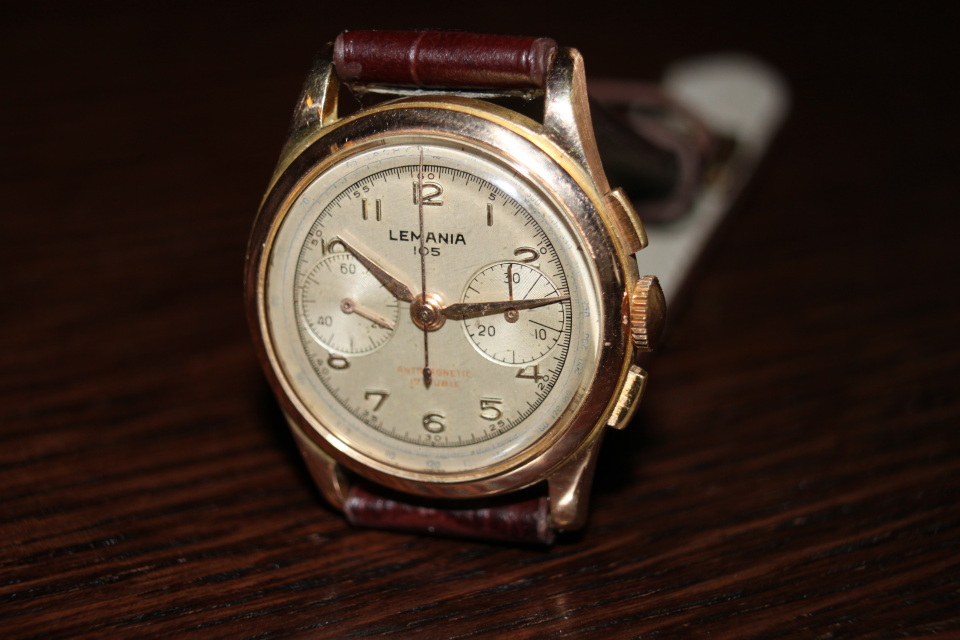 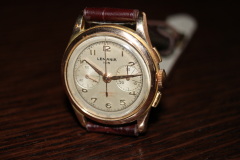 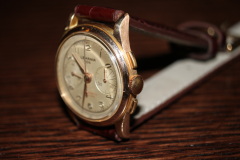 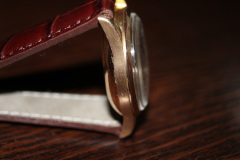 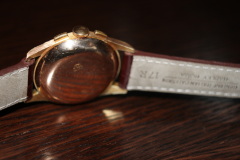 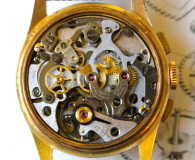 SKU: 1113
$2,365.00
$2,365.00
Unavailable
per item
A very fine solid 18k rose gold Lemania two register chronograph in original excellent vintage condition with in-house Lemania cal. 1270 manual wind movement.  For those of you that do not know the name Lemania, you should, so here is a brief history:
The watches and watch movement manufacture Lemania was founded in 1884 by Alfred Lugrin (1858-1920), who had acquired his expertise as a laborer at Jaeger-LeCoultre in Le Sentier. Because of the outstanding quality of his watch movements Lugrin received top awards and gold medals at exhibitions in 1906 in Milan and in 1914 in Bern. From the beginning he had specialized in the production of chronographs, stopwatches and repeaters.

Till the year 1930 the factory had the name to Lugrin S.A., until Lugrin's son in law Marius Meylan established the brand name Lemania Watch Co. with headquarters in L'Orient. In 1932 Lemania, Omega and Tissot joined to form the SSIH group. In close collaboration with Omega great chronograph calibres were created.

The Lemania Calibre 1873 (Omega Calibre 861) became particularly famous with the Omega Speedmaster, which in 1962 was selected by NASA for manned space flights and on 21 July 1969 accompanied Neil Armstrong's first steps on the moon.

With the advent of electronic watches in the 1970s the sales of mechanical watches by the SSIH group broke in massively. In 1980 the creditor banks gave Nicolas Hayek the mandate to restructure the group. As part of a management buy-out Lemania was separated by the SSIH Group in 1981 and changed its name to Nouvelle Lemania. In 1992 the Nouvelle Lemania came to the Groupe Horloger Breguet, which, in turn, was acquired by the Swatch Group in the year 1999. The Lemania calibers are still used in watches of many well-known brands.
It is very difficult to find chronographs of this era in which the movement is made in house by the watch manufacturer.  Although these watches are scarce in general, this model is particularly difficult to find in 18k gold and with its original unaltered dial.  Most of these models were made in stainless steel  or gold filled as they were particularly popular with pilots who usually could not afford a solid gold watch.
This watch comes on a new dark brown hadley-roma strap and is suitable for both casual, business and fine formal wear.
Sold out
Add to Cart