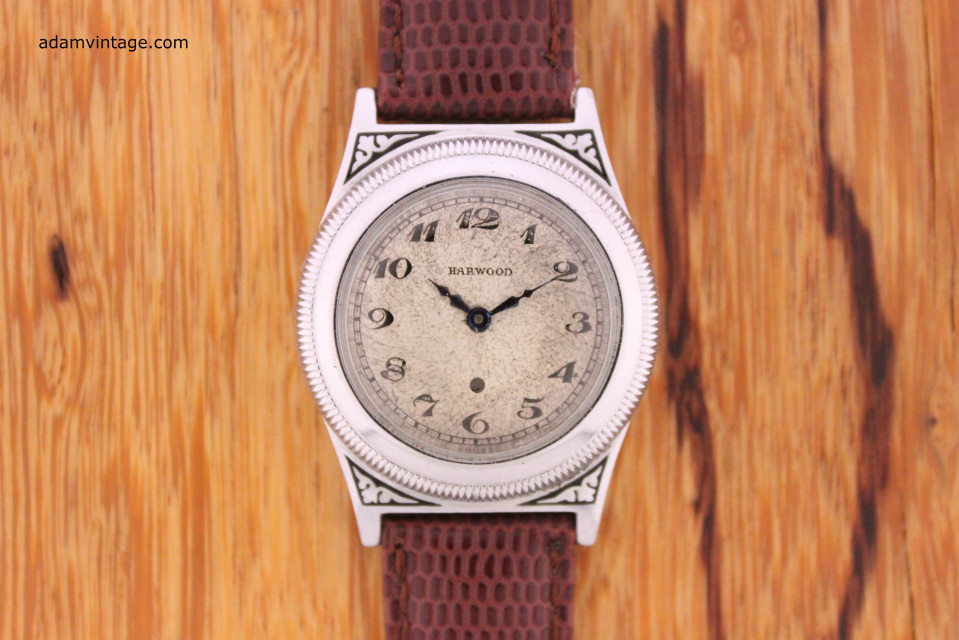 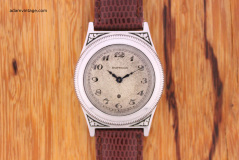 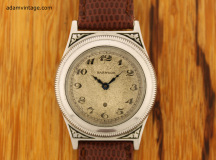 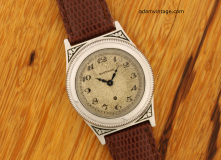 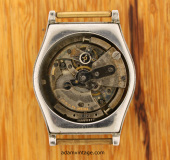 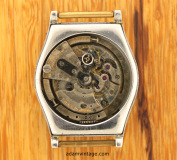 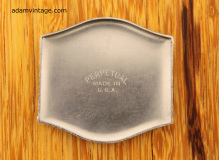 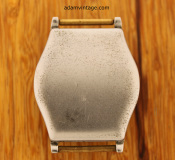 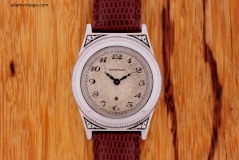 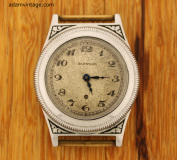 SKU: harwood-001
$675.00
$675.00
$675.00
Unavailable
per item
This is an extremely important USA market Swiss Harwood (first ever produced automatic watch) in completely original unmolested condition.  This particular piece is cased in an Art Deco style case by a USA case maker.  The movement is an in-house Harwood original automatic that was conceived first with an idea and then brought to fruition with the help a A. Schiff and Blancpain to produce the high-end; highly technical 15 jewel adjusted to 2 positions movement hammer automatic.  Notice this watch has no crown.  This innovation was another invention by Harwood who figured out that many of watch failures during WW1 were due to dusk, dirt and moisture entering the crown.  The watch is set by turning the coined bezel clockwise and then the movement is engaged (turned on) by turning it slightly counter clockwise until the circle at 6 o'clock is red.  The case appears stainless steel; however, is unmarked.  If it was chromed at nearly 100 years old, I believe we would see a lot of oxidation which is not the case here.   The dial is original and never refinished (very rare) and the hands are original fire blued steel.  The case measures approximately 30mm across.  The watch comes on a new Hadley Roma lizard strap.  Although the watch is running excellent and was recently serviced; this is one of those watches I wouldn't wear very often as It may be one of a kind with this case design.

Here is some more information from the Harwood site:

On the Isle of Man, the English watchmaker John Harwood had a vision of a new type of reliable wristwatch that would eliminate the shortcomings of watches available at the time. Dust and moisture were the most common culprits he encountered in his watch movement repairs. John Harwood therefore set about developing different winding and hand-setting mechanisms located inside the watch to dispense with the need for an opening in the watch case for the winding stem.

Coincidence that gave John Harwood the brilliant idea for his revolutionary invention. Observing children playing on a see-saw, he began to envisage the basic design of his legendary “self-winding mechanism”. Using accumulated kinetic energy to tension the spring of a wristwatch was an excellent idea. A series of experiments culminated in the first prototype of a self-winding wristwatch that was created from a discarded pocket watch.There was no winding crown and the hands were set by rotating a milled bezel, which was also used to wind the mechanism. A red dot, which appeared in the dial aperture above the “6” showed that the mechanism was running.

John Harwood traveled to Switzerland several times since he felt that only there could he find the technical conditions for realizing his invention. On September 1, 1924 the Swiss Confederation in Berne awarded him Patent No. 10 65 83 for his pioneering invention of the first self-winding wristwatch.

The HARWOOD Automatic relied on pawls and clockwork and a pivoted oscillating weight that moved to and from through an arc of 270° hitting buffer springs on both sides (so-called hammer automatic).