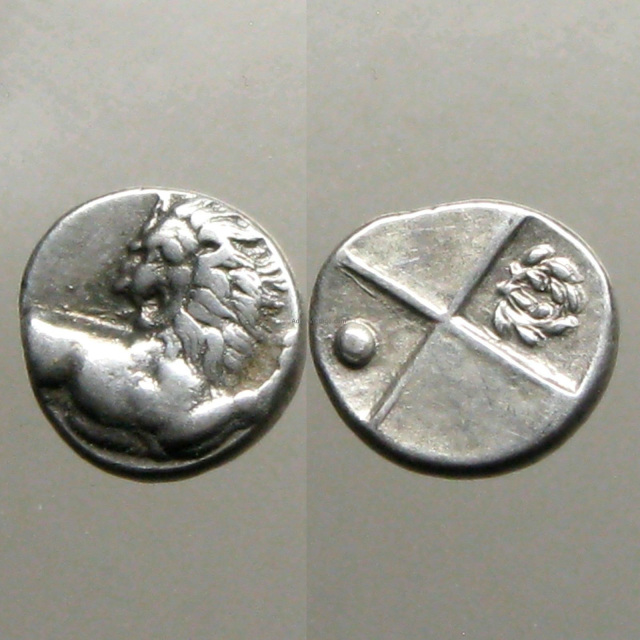 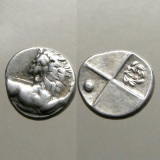 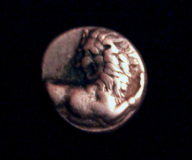 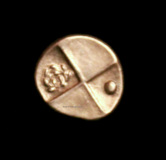 Early coins, such as this stunning bright silver coin of a lion, lying down looking left, head reverted on the obverse and a classic early Greek design on the reverse featuring quadripartite incuse square with alternating raised and sunken quarters. Pieces such as these are much more uncommon as compared to most Roman coins, Great eye catching examples are highly sought after and can demand a premium over average examples. This is a great example with both sides struck very well and centered. The lion on the obverse is extra high relief; with both side having great detail with little wear. Stunning artistry went into making these dies that struck this coin; and we are lucky enough that we had a mint worker who cared about his work. Prior to the modern era, coin dies were manufactured individually by hand by artisans known as engravers. This is why you find slight variations of the same coin from the same mint. Dies did not last forever, many artists were commissioned to do this fantastic work that we are so lucky to have today.

Chersonesos is an ancient Greek colony founded approximately 2,500 years ago in the southwestern part of the Crimean Peninsula. The colony was established in the 6th century BC by settlers from Heraclea Pontica.

The ancient city is located on the shore of the Black Sea at the outskirts of Sevastopol on the Crimean Peninsula, where it is referred to as Khersones. It has been nicknamed the "Ukrainian Pompeii". The site is now part of the National Preserve of Tauric Chersonesos. The name Chersonesos in Greek means "peninsula", and aptly describes the site on which the colony was established. It should not be confused with the Tauric Chersonese, the name often applied to the whole of the southern Crimea.

Chersonesos was for a time ruled over by Athens, which enrolled it into the Delian League in 478 BC. The Athenians established a number of cleruchies on the Thracian Chersonese and sent an additional 1,000 settlers around 448 BC. Sparta gained control between 431 BC-404 BC, but the peninsula subsequently reverted to the Athenians. In the 4th century BC, the Thracian Chersonese became the focus of a bitter territorial dispute between Athens and Macedon, whose king Philip II sought possession. It was eventually ceded to Philip in 338 BC. The Size is 13.0mm and 2.28gm

As of the time of this listing, we cannot find any of this type for sale; although there are examples on display online; interesting that most of the examples found are inferior in grade as ours. We believe this is a great value at $275.