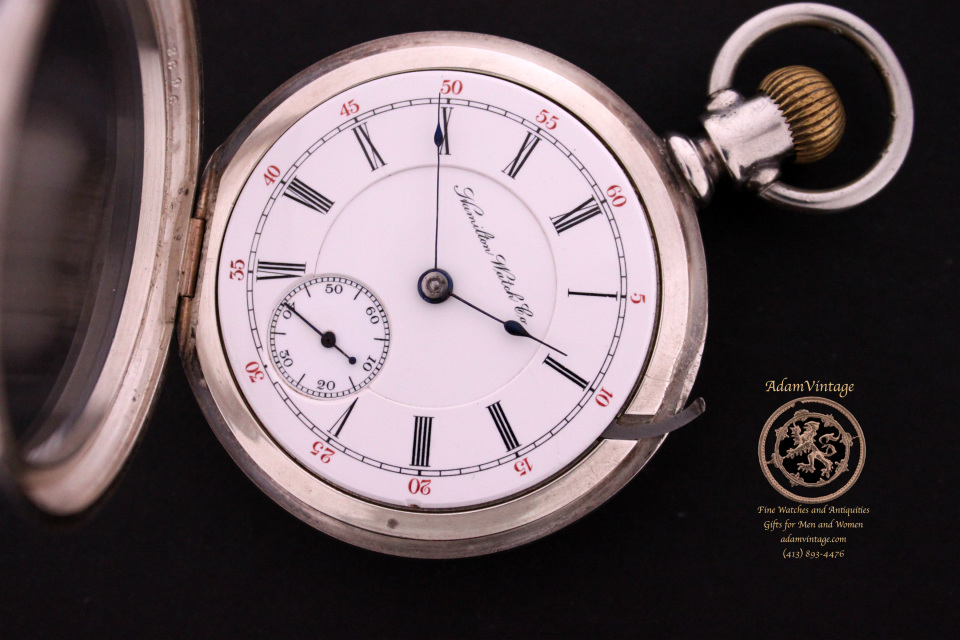 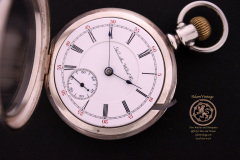 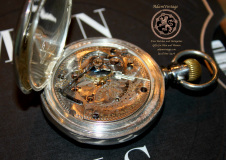 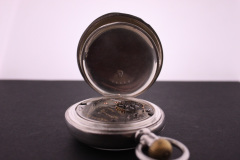 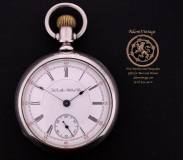 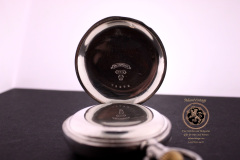 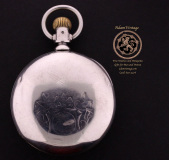 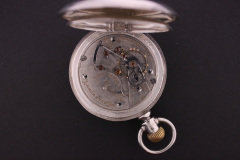 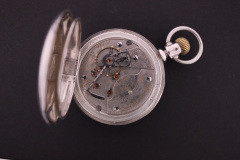 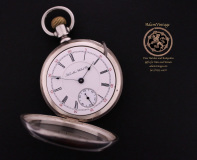 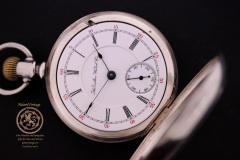 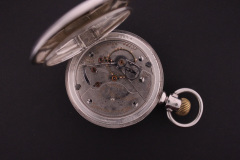 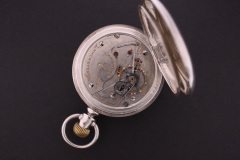 This is a very exciting new addition to our railroad approved pocket watch collection. Records show that this watch went to the finishing dept. at Hamilton on September 16, 1898; which means is was likely at the jewelers for sale early 1899. There are very few 17j pocket watches that are railroad approved, but what this watch lack in jewel count is overwhelmed with high end craftsmanship and materials. Let's start with the dial, this one is perfect, there are no hairlines found under 10x, no flaking or gouges. There is a tiny factory chip at 4 0'clock that you cannot see unless you remove the bezel, it's almost underneath the dial, and like I said, clearly happened at the factory or during a service and has no impact on value since it is so minor of a flaw. The dial is the most expensive and sought after porcelain, with a double sunk dial, very attractive uncommon Roman numerals, with a 60 sec outside chapter ring in arabic numerals. The signed dial is done in a beautiful cursive as Hamilton Watch Co. It appears that the watch has a factory original glass crystal in very clean condition. The case, measuring 55mm, is heavy and thick. Made by Keystone, one of the most regarded case makers, this is a 3oz. coin silver case. 3oz. cases are fairly unusual. The case shows wear, but not excessive, and two minor dents on the side of the case (one around 6 o'clock and the other at 2 o'clock off the side on the case back). These are both minor and are expected with the age case - and it's tough to find rare pocket watches still in their original case. Let's move on to the movement, the best part of this watch. Just serviced September 2018, Hamilton only made just over 2,000 of this Grade 938. If you look at Hamilton at a watchmaker in general, very few were made with this small number. For example, the 936, a popular railroad watch made around the same time, produced almost 24,000 pieces - and that's small too! As you turn the century, you see many Hamiltons with production numbers well over 50,000. Back to our movement. This was an expensive watch to make, which is probably why we see so little produced. Other than the features I've pointed out, we have a full plate movement with gold set screwed in jewels of both Ruby and Sapphire, gold gilt engraving, amazing hand done decoration on the entire plate(s), Breguet hairspring and full sapphire jewels on the palet. I took one picture with a flash, so you can get a better idea of the amount of decoration on this piece.This is an important piece for a serious collection, to start a collection or as a fantastic gift.