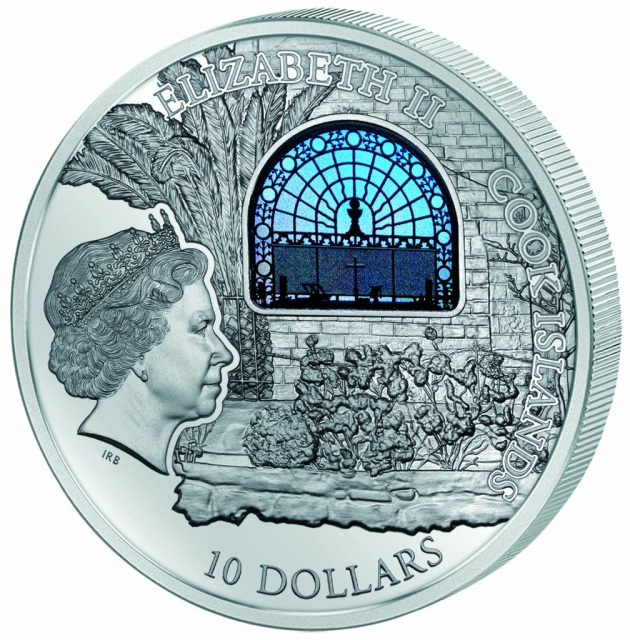 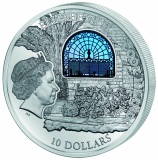 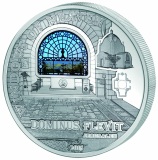 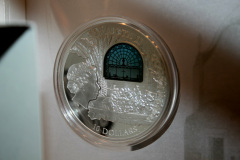 The Windows of Heaven series is one of the most famous in the world. With a genuine stained glass insert, each issue depicts a famous window from holy sites around the world. The highly detailed glass insert combined with the high quality proof minting makes this coin very unique in the collector coin market. This release features the Dominus Flevit, a Roman Catholic Church on the Mount of Olives, opposite the walls of the Old City of Jerusalem.

Dominus Flevit was designed and constructed between 1953 and 1955 by the Italian architect Antonio Barluzzi and is held in trust by the Franciscan Custody of the Holy Land. During construction of the sanctuary, archaeologists uncovered artifacts dating back to the Canaanite period, as well as tombs from the Second Temple and Byzantine eras. Dominus Flevit, which translates from Latin as "The Lord Wept", was fashioned in the shape of a teardrop to symbolize the tears of Christ. Here, according to the 19th chapter of the Gospel of Luke, Jesus, while riding toward the city of Jerusalem, becomes overwhelmed by the beauty of the Second Temple and predicting its future destruction, and the diaspora of the Jewish people, weeps openly. (an event known as Flevit super illam in Latin language)

The site of Christ's weeping was unmarked until the Crusader era. It was during this time that people began commemorating the site. Eventually a small chapel was built there. After the fall of Jerusalem in 1187, the church fell into ruin. In the early sixteenth century a mosque or madrasah existed at the site, presumably built by the Turks, from the remains of the earlier church, although the exact use is disputed. This place was known as el Mansouriyeh (The Triumphant) and also el Khelweh (The Hermitage).

The Franciscans were unable to obtain the ruins, so, in 1891 they purchased a small plot of land nearby and built a small chapel there. In 1913 a small private home was built in front of the Franciscan chapel by one Miss Mellon.