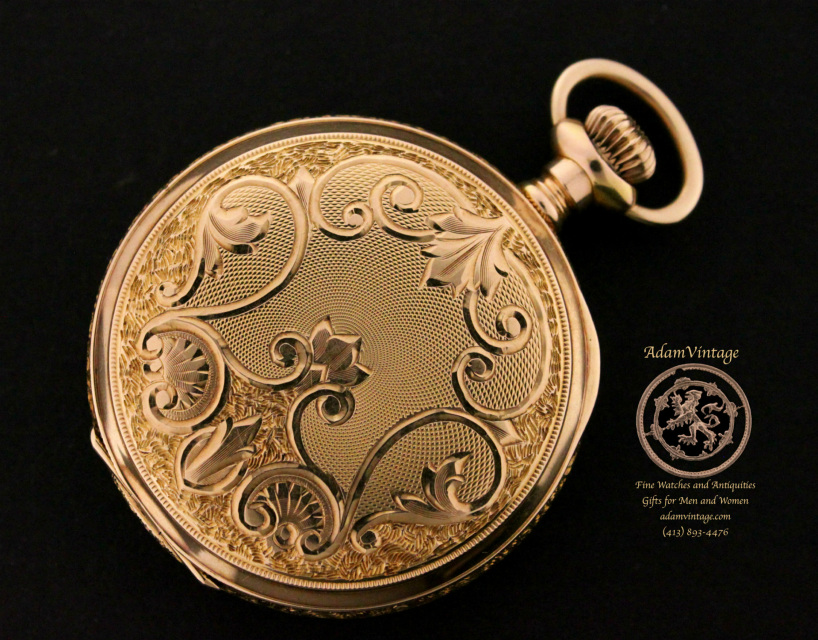 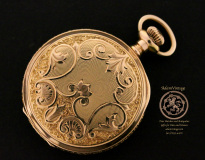 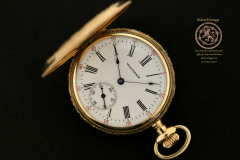 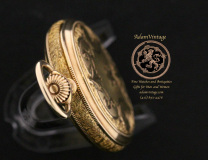 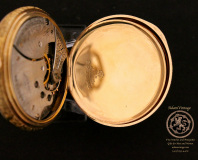 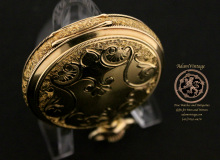 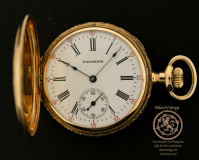 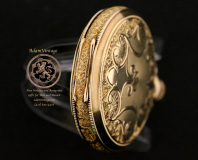 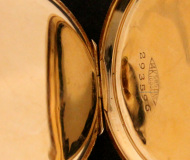 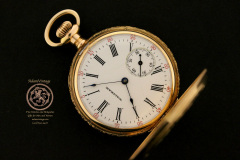 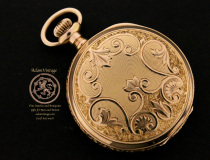 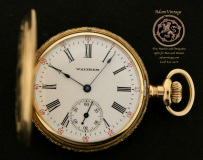 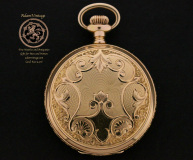 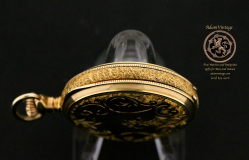 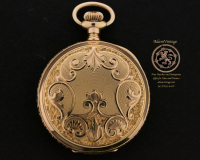 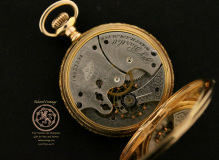 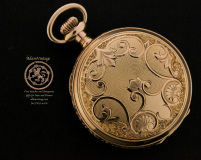 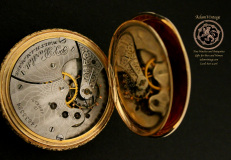 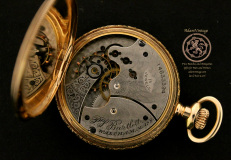 This watch is one of the reasons I love to curate. First off, the case work is beautifully done in an original rare solid 14k bright yellow gold case. This is rare because almost all Seasides were made with gold filled cases. Furthermore, this model contains the illusive 15 jewel edition, a much higher end movement not just because of the jewel count, but also the finishing, which appears much better than the lesser 7 jewel examples. In fact, it's over a hundred years old and still keeps great time and has a fresh service completed. The bail is nice and snug as if it was just purchased; this watch is stem set and wound; both very smooth action. The case, in solid 14k gold, features a triple hinge design. When you push down on the crown, the obverse hing is released to reveal a classic sophisticated and perfect bright white porcelain dial with very well executed Roman numerals and the original fire blued hands. The reverse has two covers, one dust cover to protect the movement from dust, dirt and moisture; and then the fascinating outside cover, with the engraving work being a perfect match on each side. The elegance, attention to detail and artistry of the case is exquisite and worthy of being owned by someone with exceptional taste. The watch is near perfect, there is one minor flaw I found. There are two tiny pinpoint indentions on the obverse case. I looked the watch over well and I didn't see them. They are not noticeable by the eye unless you really look for them. I only had noticed when taking the photos, the camera picks up everything.

I purchased this from family estate out of Boston's italian section. I was fortunate enough to learn about the watches' history. Two young Italians, separately made the journey to America in the late 1800s. Both settled in Boston with almost no money. He was a stonemason, and demonstrated exceptional work. His work was so perfect, he was commissioned to work and oversee some of the most important historic buildings in Boston. She had a sweet tooth and made candy and sold it to local stores; shortly thereafter opened a candy making factory. The two of them met, it was love at first sight. This pocket watch was one of the most expensive and first gifts he gave her during their long life together. She cherished it so much, that there is no signs of wear that I can see. And that is the story behind this lovely piece of history. The watch is just about 40mm in diameter, and would make a great gift, addition to a collect, or to treat yourself to a personal purchase. It is not a heavy watch due to the weight of the movement; therefore, I do think this would make a marvelous pendant for that woman that doesn't mind attention.